General de Brigade scenario details are here. The battle consists of two parts: the preliminary action between the Swedish rearguard and the Russian avantgarde, and the main battle.

Preliminary action against the Swedish rearguard

Kamenski’s plan was to concentrate the forces, but the battle began when the always active vanguard commander Colonel Kulnev decided to engage the Swedish rearguard at the bridge at 04.30 AM. He had been instructed to drive away the Finns from the bridge but not to engage the enemy before 10 AM and not to cross the stream before Demidov would arrive with his troops.

Finns had finally received numerous reinforcements in the form of the Swedish units and most of the troops still available were now concentrated in Oravainen area. There was plenty of disagreement whether a fight should be put out in Oravainen or if the retreat should be continued. However as the king had finally reinforced the Finnish army with Swedish troops it was thought that it would be highly dubious if these fresh units were not used in battle.

The Swedish rearguard consisted of half of 3 battalions, supported by two 6 pounders and a very small detachment of guard cavalry.

Since we didn’t have sufficient space at our own gaming area to mount the extra piece required by Oravainen’s vanguard action next to the actual battle’s terrain we decided to play the vanguard action separately. 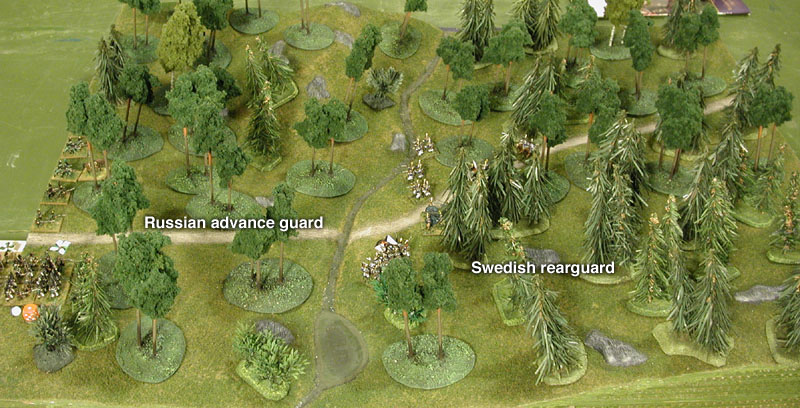 Initial positions. Early in the morning the first elements of Colonel Kulnev’s vanguard drive away the advance guard post of the Swedes who retreat to the main rearguard alerting them of the Russian advance. 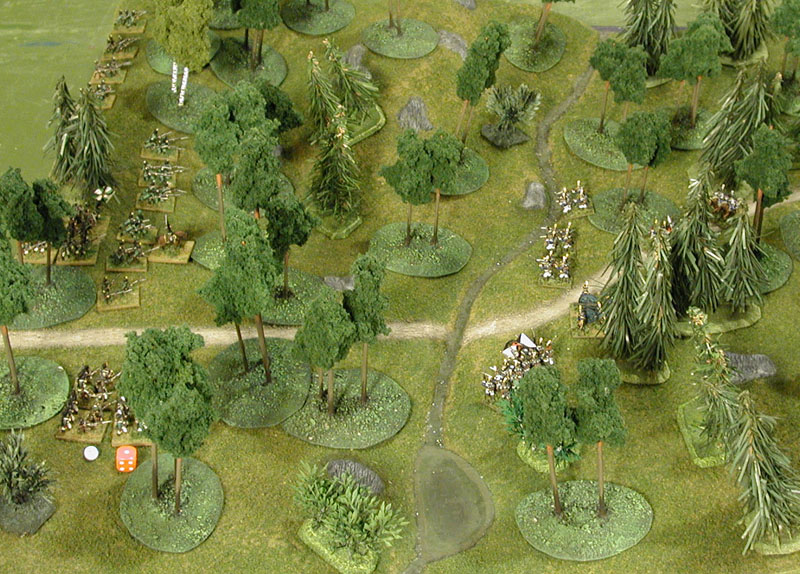 Turn 1. More Russians emerge. 3rd jaeger regiment is on the left flank while Sievsk musketeer regiment stays in the vicinity of the road moving in disorganized but formed columns though the dense forest. 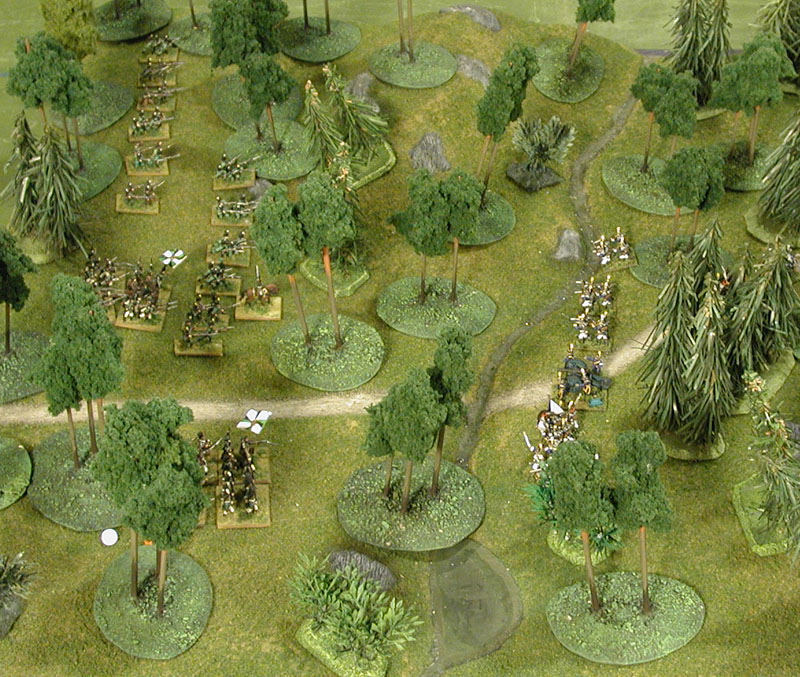 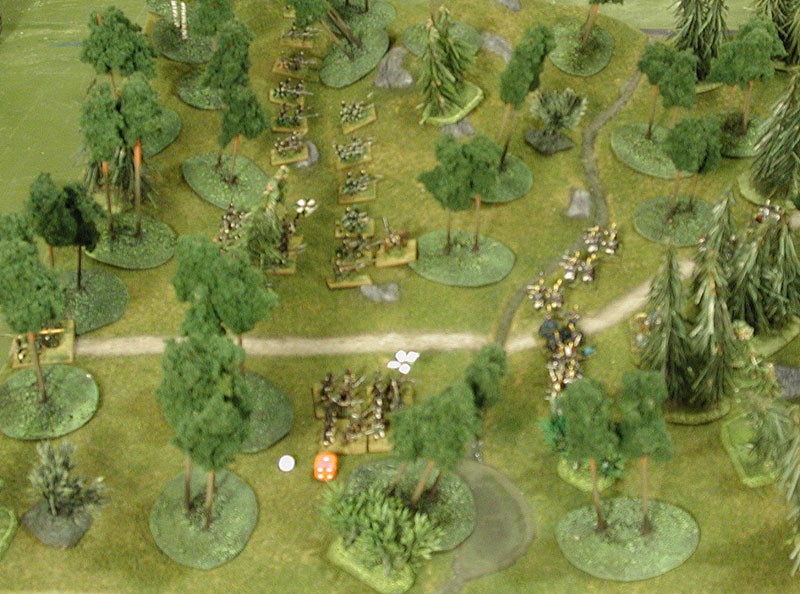 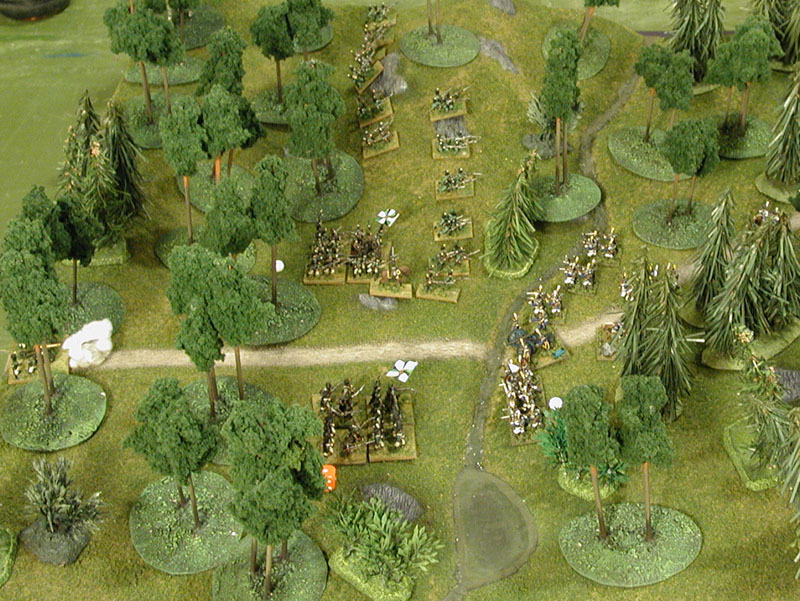 Turn 4. Russian units press forward. On the Swedish side the half battalion of Hälsinge regiment moves to occupy the stream’s shore while artillery is also moved slightly forward to enable it to fire when the Russians try to cross the stream. Russian artillery starts counter battery fire which is ineffective.

Turn 5. Russian skirmishers reach stream and heavy skirmish fire breaks out. The Sievsk battalion on east side of the road forms up while Swedes fire them with canister. 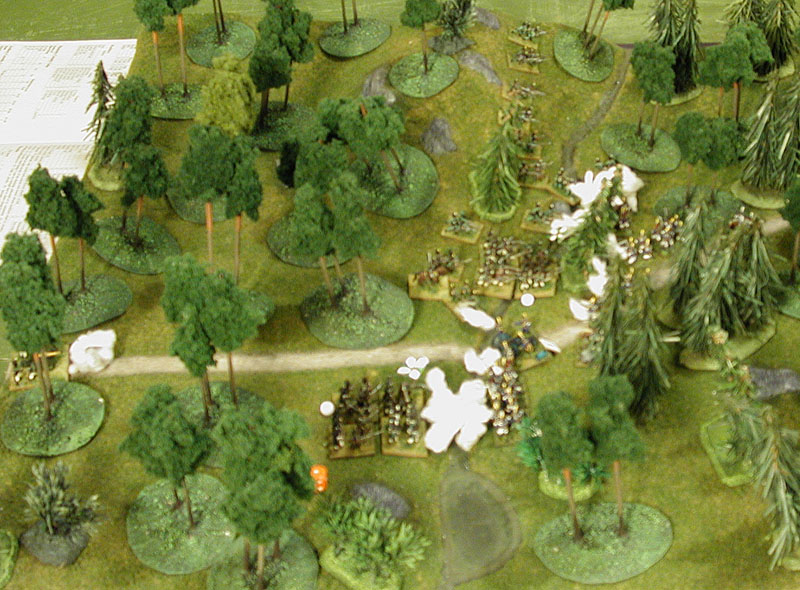 Turn 6. The Sievsk battalion charges across the stream but heavy fire from Swedes stop it and also would Kulnev. Russian skirmishers manage to case casualty to von Schwerin’s artillery which falter. Drawn by the gunfire from the rearguard both the CIC of the Finnish division Major-General count Adlercreutz and the CIC of the Swedish division Major-General baron von Vegesack arrive to inspect the situation. 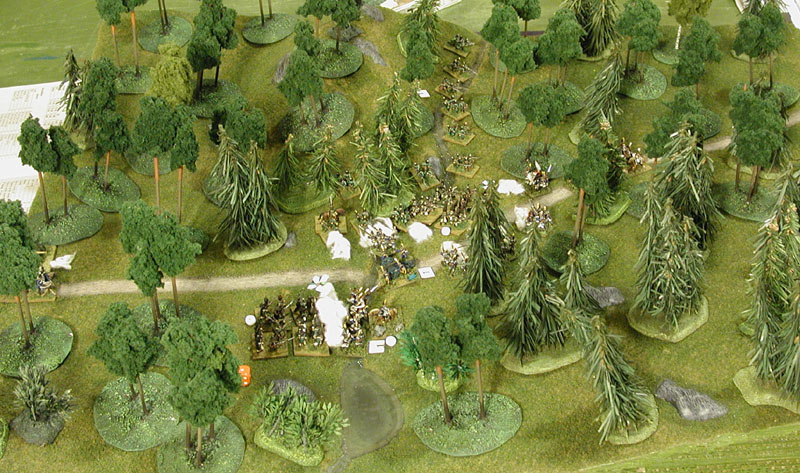 Turn 7. The Sievsk battalion now gets charged by the opposing half battalion of Hälsinge regiment and faced by the furious attack of Swedes they decide to retreat instead of putting up a fight. They rolled snake eyes which also wounds the Swedish rearguard commander Major Cedergrén thus commanders of both sides had been wounded. The other half battalion of Hälsinge regiment so far kept as formed reserve is now deployed in skirmish formation against the advancing hordes of Russian jaegers which now cross the stream. 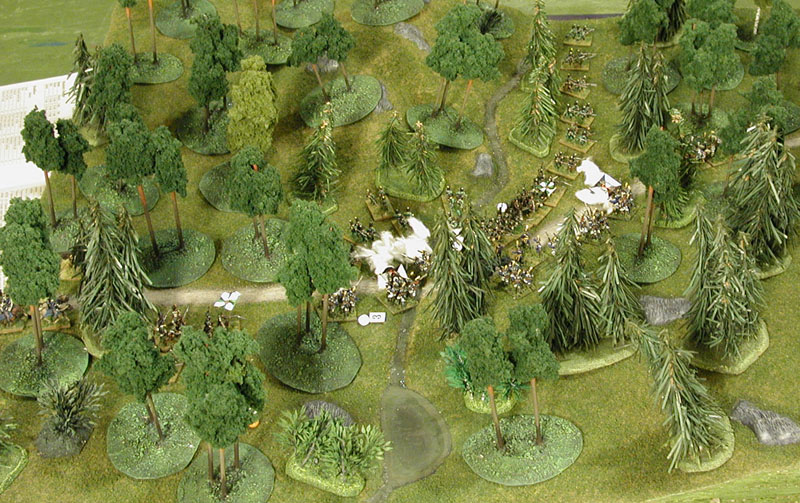 Turn 8. There is now a very real threat that the Russian left flank will cut off the road which would mean that the Swedes would have to abandon their artillery and retreat through the forest. Luckily small Swedish reinforcement starts to arrive consisting of the remainder of the combined jaeger battalion. 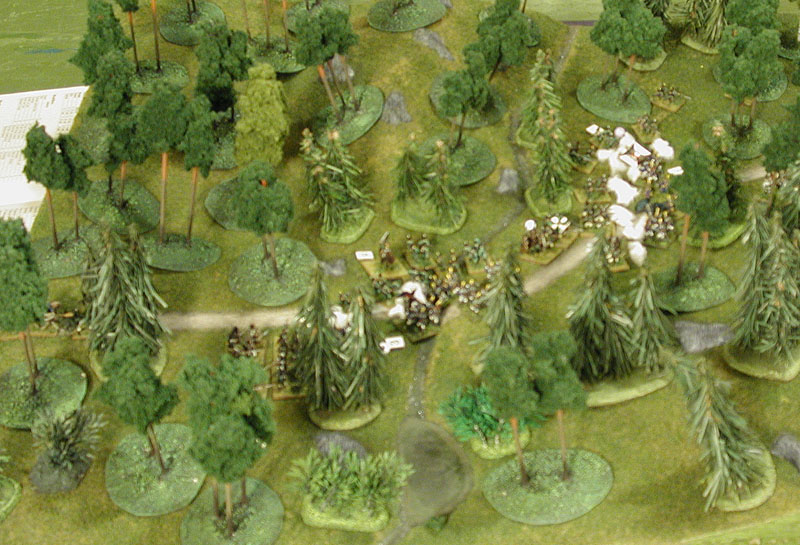 Turn 9. At the bridge a quite even melee breaks out but by desperately leading his men forward by personal example Kulnev manages force the Swedes into retreat. However during the confusion he is captured by the Swedes.

Turn 10. Swedes give ground but just barely manage to save their artillery. The reinforcements start to enter battle with the Russians and the retreating Swedish jaegers are rallied. Russian artillery an cavalry starts to advance.

Turn 11. One of the Russian 3rd jaeger battalions finds itself at low ammo. The retreating Hälsinge half battalion routs thereby breaking the whole brigade. The Swedish rearguard runs to the main lines while Russians regroup and ready themselves for assault against the main positions.

The Russians fared better than historically even if they lost their commander. In the real battle Swedes put up a very spirited fight and actually seemed to forget that this was just a rearguard instead of main positions. The Russians weren’t able to significantly push the Swedes back before Demidov’s troops arrived.

Continue to description of the main battle.

On 13th rearguard was assigned to major G. Cedergrén who placed vedettes under Lieutenant J. M. Omnberg some 500 metres further. Cedergrén had barely managed to organize the rearguard when his troops started to get harassed by cossacks. However these quickly left the scene when Liv gard till häst engaged them but Russian jaegers that had also arrived had to be driven away. After darkness fell everything became quiet. The exchange did rouse interest of the brigade commander Lieutenant-Colonel F. C. von Platen as well as the commander of the Swedish troops Major-General baron E. E. G. von Vegesack as well as the overall commander Major-General count C. J. Adlercreutz all of whom were drawn to the rearguard to see what was going on. Platen decided to stay with the rearguard so that the following morning even stronger opposition could be made.

The 14th dawned sunny and clear. The impatient Colonel Kulnev started to engage Swedes already 04.30 AM even though he had been instructed to drive away the Finns from the bridge but not to engage the enemy before 10 AM and not to cross the stream before Demidov would arrive with his troops. Despite of well aimed artillery fire Russians managed to push Platen’s rearguard back some hundred metres but his counterattack was successful especially in the north where a battalion of 3rd jaegers was driven back. Kulnev sent a battalion of Siev musketeers under Riman to counter this threat to his left flank. In the ensuing fight the Swedes gained the upper hand and Kulnev was forced to send the other Siev battalion under Ljukov to the fray. As pressure was also mounting on Swedish left flank Platen commanded his troops to draw back as artillery kept the enemy at a respectable distance.

As a reinforcement von Vegesack had sent to the had pressed rearguard the remaining companies of the two already engaged Hälsinge battalions, the remainder of the jaeger battalion as well as some 50 men from Savo regiment. Von Platen directed these reinforcements to his left flank where the Russian advance was halted and Kulnev now had to ask reinforcements from approaching Demidov.

These consisted of Petrov and Perm musketeers and were directed against the Swedish left flank and began to encircle the Swedish troops. After the whole affair had lasted some four hours von Platen sent a courier to their commander von Vegesack asking for more reinforcements. He replied: “Let them hold on a while longer. It’ll do good for those butter-eating Hälsinge guys”! Von Platen was wounded by a canister shot which hit his cheekbone and had to leave the command to Cedergrén who was also wounded, albeit lightly. He led the troops back to the main lines with all the wounded and even some prisoners. This was greatly due to the exemplary conduct of the artillery and the wounded young Ensign count V. von Schwerin who refused to leave his section before the whole rearguard had been able to retreat. This 16 year old hero died two weeks later of these wounds.

The rearguard troops were directed behind the lines to the Oravainen village and given ammunition as well as rest. During the time rearguard was engaged some preparations were made at the main lines. Trees were felled and hay barns were torn to pieces out of which defences were built. These actions hadn’t been undertaken earlier as originally Adlercreutz had planned to keep on moving northwards.