Setup for the game. 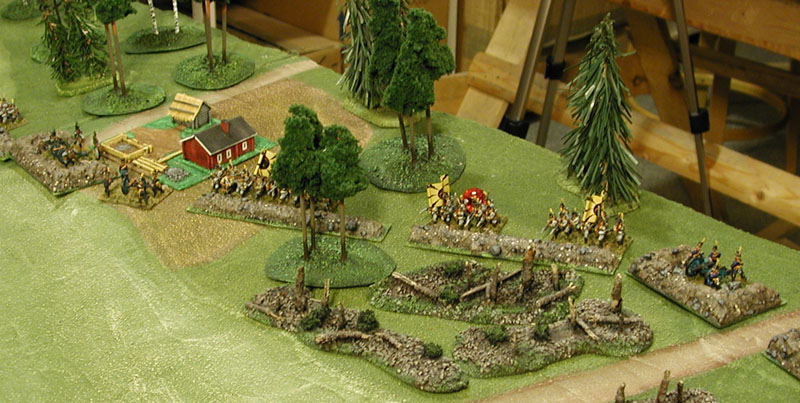 Units from 4th (Savo-) brigade behind their fortifications and felled trees in the vicinity of Takala farm. 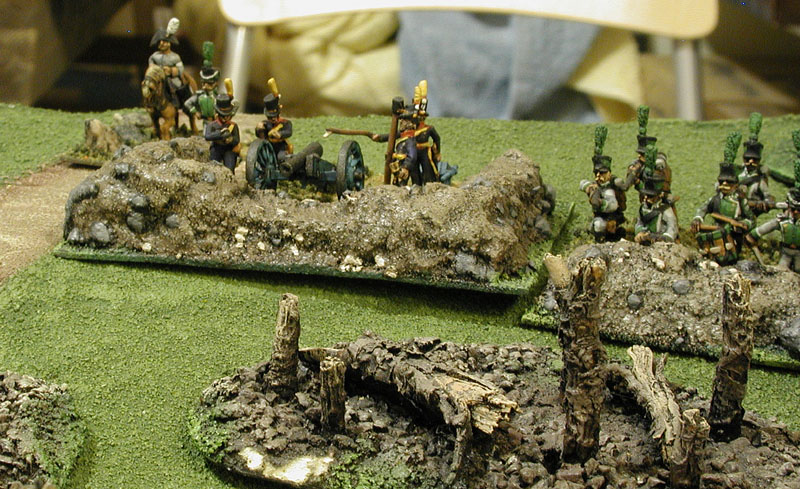 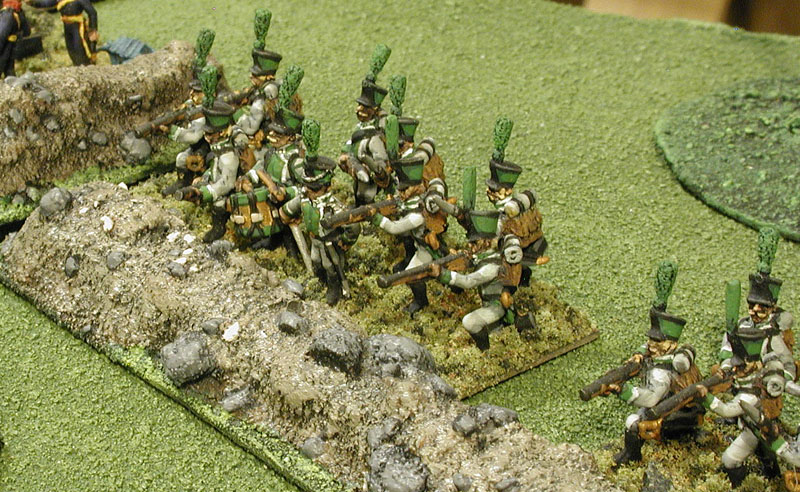 A half company of Sav jaegers readingthemselves for stiff resistance. 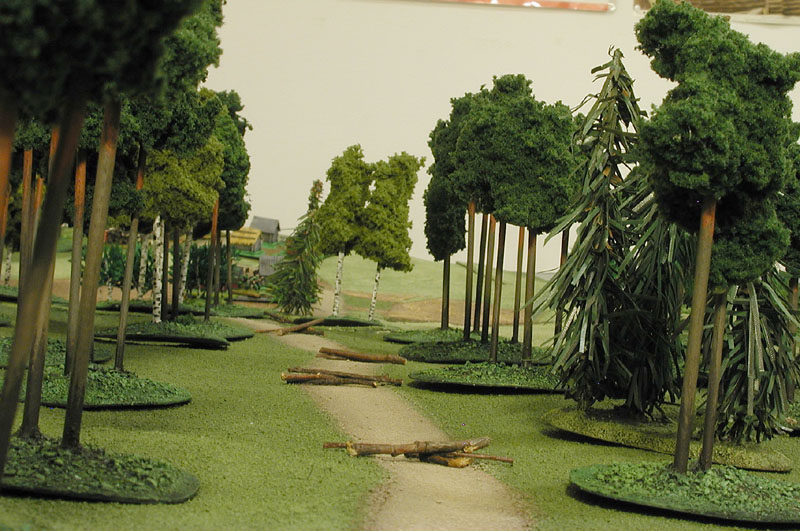 To slow Russian advance Finns had felled tress on the roads leading to north from Heroja farm. Here we are looking towards Russian occupied Heroja from north.

The Russian attack against Finnish left (northern) flank is preared in the cover of the forest. When Finns retreated to their positions the following evening they burned the long wooden bridge leading over Ruonanoja stream.

During the night Russians prepared their own artillery positions and during the day an artillery duel ensued during which one finnish gun was dismantled as the Russian 12 pounders were positioned somewhat to their flank on a cape.

It took Russian most of the day to move their forces into attacking positions as all movement had to be done across heavy forest since the Finnish main artillery positions at Ruona proper guarded the narrow strip of unforrested area on the east side of the shallow lake Nisos. They actually had two 6 pounders dismantled and moved the pieces through the forest to Sipola where they were assembled again. The attack began late afternoon around 2-3 PM. 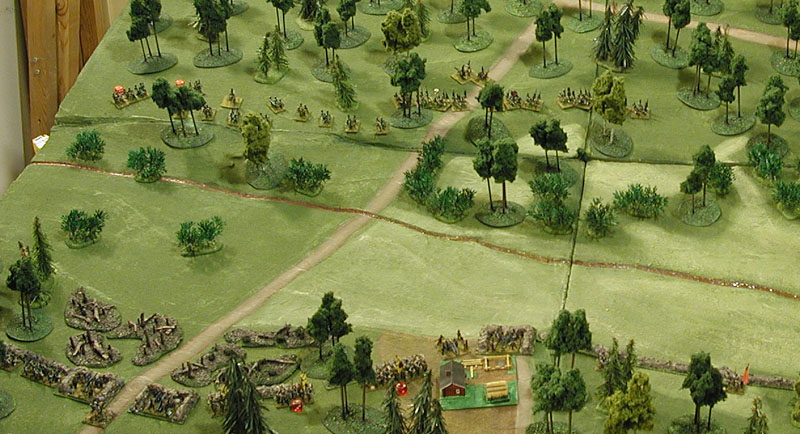 The attack starts moving through the heavy forest. Troops either deploy in skirmish order or get into disorder. 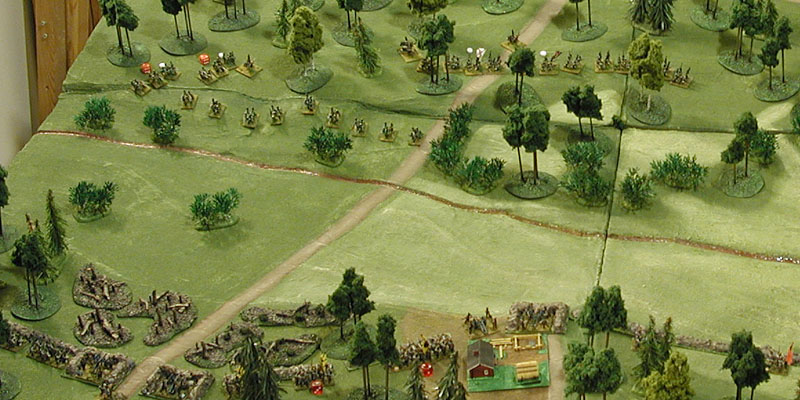 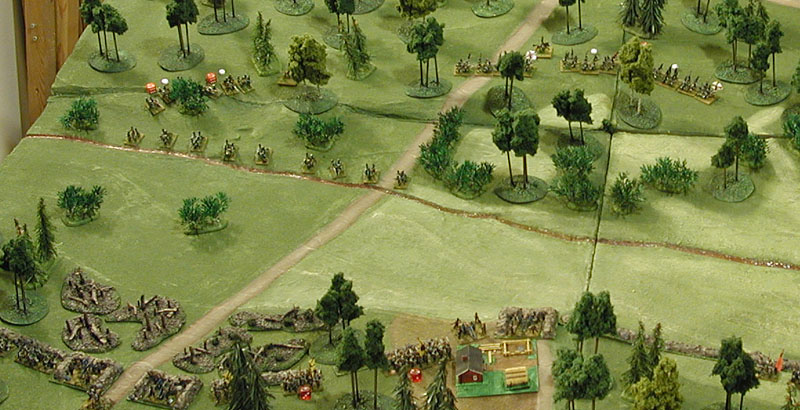 Russians keep on moving slowly in the forest. Outside the picture in the souternmost edge of the battlefield troops of the 3rd brigade start moving northwards. South of Takala farm 3rd battalion of Turku regiment starts reforming into close order behind the fortifications.

Savo artillerymen fire at the smaller 23rd jaegers (which are in line formation) further down in the forest edge and manage to draw first blood.

26th jaegers spread out a bit and the musketeer battallions trundle onwards. 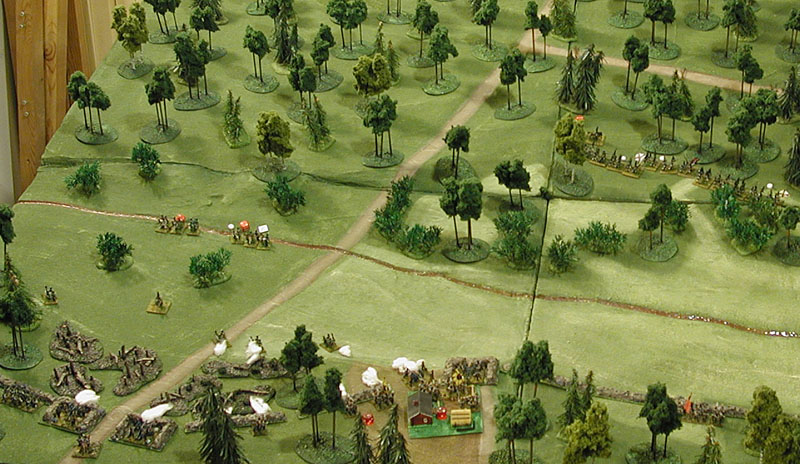 Having entered the infantry’s fire range one battalion of 26th jaegers recieves heavy fire from both Savo brigade’s line infantry and artillery causing it 3 casualties. 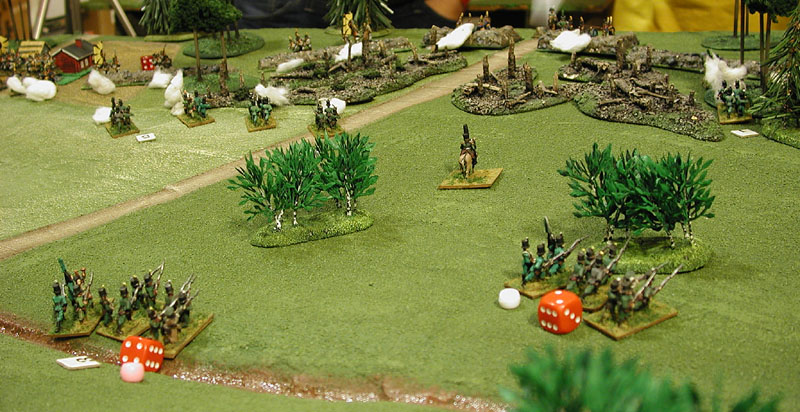 The smaller, still formed, battalions of 23rd jaegers watch impotently as the 26th jaegers are being ground to pieces by the 4th (Savo-) brigade’s superior marksmanship. So far Chris, who played Finns, had succeeded in making ALL half casualties caused by his troops into actual casualties! Casualties so far – Russians: 11, Finns: 0. The attack is not going that well.

The retreat of the 23rd jaeger battalion turns into a rout. More to the north the other battalion of 26th jaegers has engaged the Savo jaegers, but quickly expends most of its ammunition.

A panorama on the southern part of the battlefield. Two battalions from 3rd brigade move nortwards from the artillery postions at Ruona proper (off board) to reinforce Perälä farm and the 2nd Uusimaa battalion there. On the other side of the field Bieloserk regimnt arrives to Sipola farm.

The battalion of 26th jaegers on low ammo charges Savo jaegers but is beaten back. The routing battalion of 23rd jaegers disperses and the whole brigade breaks. A half battalion of Savo infantry regiment is moving through Takala farm to support 1st brigade south of Takala. 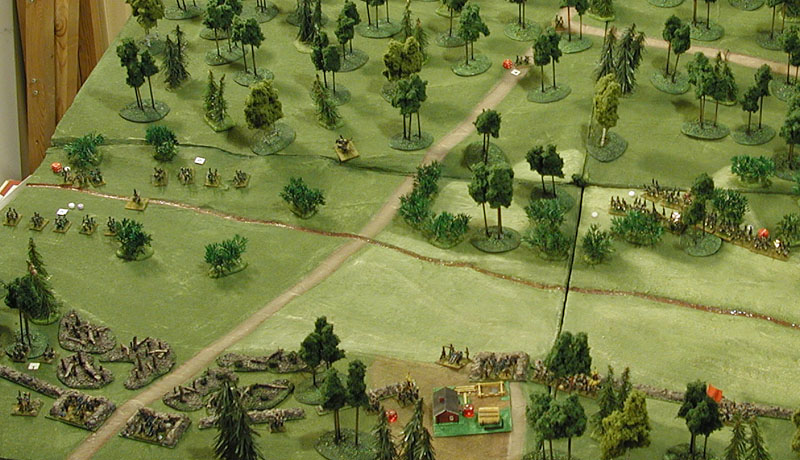 The jaeger brigade has retreated after failing to crush finnish 4th (Savo-) brigade. 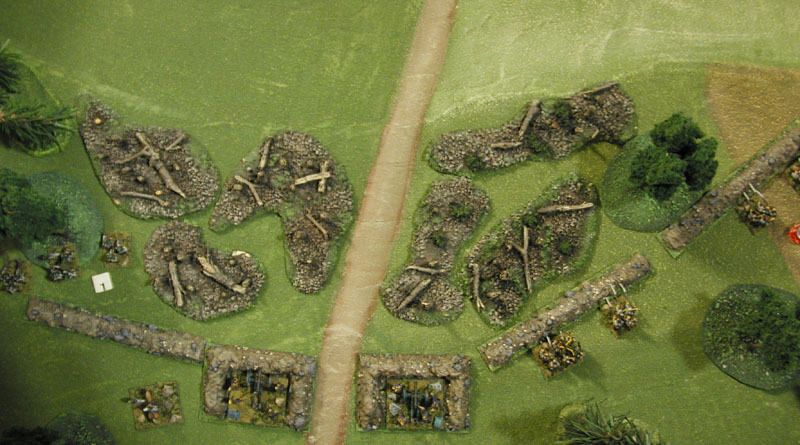 With felled trees in front of their fortifications to slow down the enemy’s advance, the positions of 4th (savo-) brigade’s artillery is a tough nut to crack! 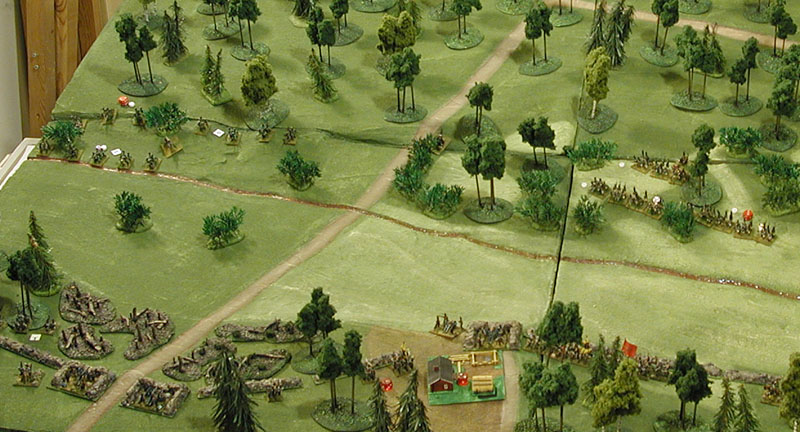 Jaeger brigade retreat to the cover of the forest while musketeer brigade starts to emerge from the woods -much too late for a coordinated attack.

2nd Turku battalion moves northward to reinforce 1st brigade’s positions south of Takala farm. Since the Russian jaeger brigade was mauled before the musketeer brigade even had a chance to launch its attack the musketeers recieve new orders to retreat to Heroja farm.

4th (Savo-) brigade is ordered to follow up the retreating Russians and first eager companies run to the field. The lone battalion of 6th brigade enters the field from the direction of Salmi. 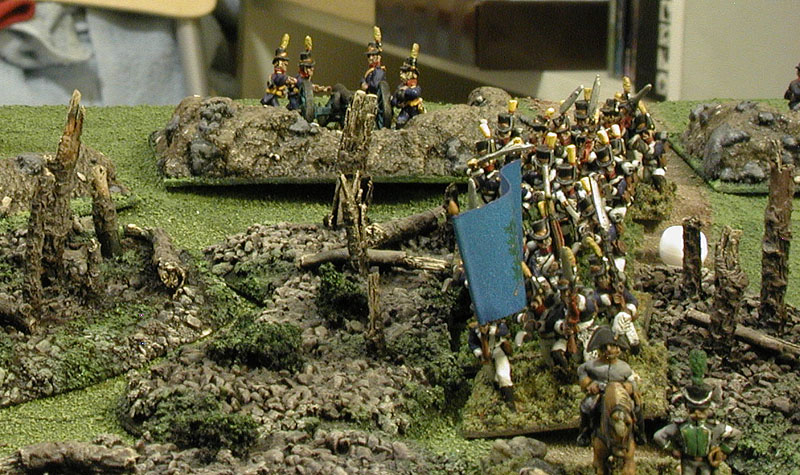 The Swedes of the 2nd (Southern-) battalion of Västerbotten regiment march towards retreating Russians while the victorius 4th brigade’s artillery watch the attack’s progress.

The Russians are now pursued by the whole skirmishing 4th (Savo-) brigade. 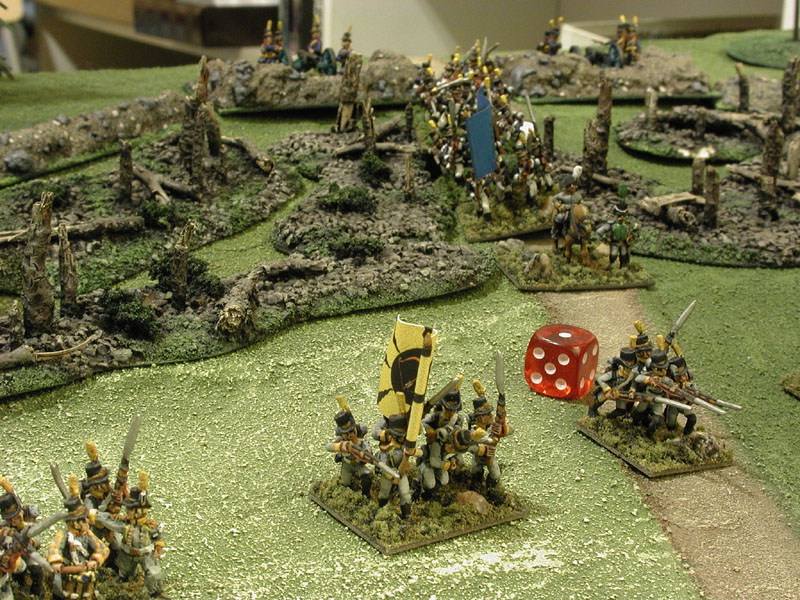 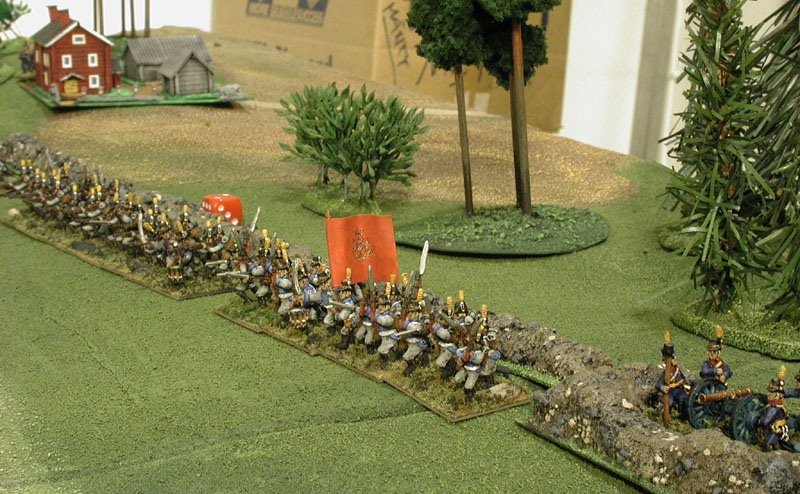 While slightly towards north troops seem to move in rather slow manner.

Retreating Russians are followed up by skirmishing 4th (Savo-) brigade with the formed 6th brigade consisiting of one battalion of Västerbotten regiment in tow. More to the south the jaegers of 3rd brigade cross the stream while one battalion of Bieloserk musketeer regiment occupies Sipola farm and the other battalion of the same regiment moves between Sipola and Heroja farm. The latter is occupied by a company of 26th jaegers.

Having reached the stream line the line units of 3rd brigade stop and jaegers move slightly to front. Northward the retreat/follow up continues withj no contact. 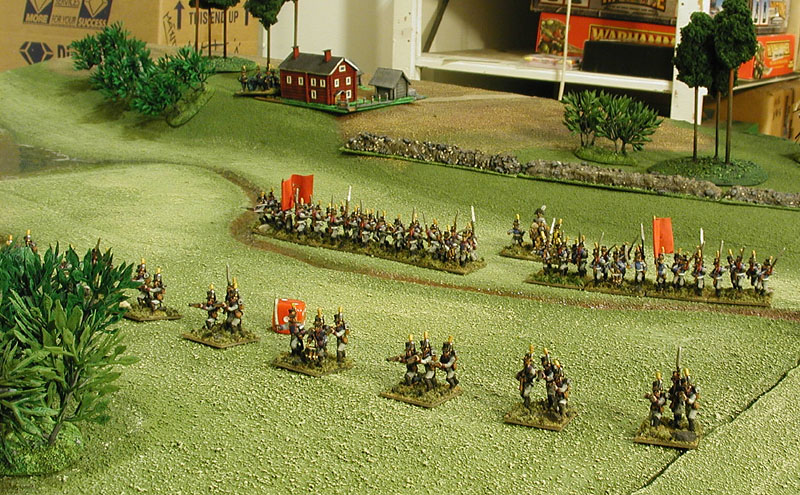 3rd brigade has advanced to the stream and jaegers have taken forward osition in the field. Behind Finnish fortifications and Perälä farm and the steep incline to the east of it can be seen.

The Russians wanted to retreat to the Sipola/Heroja line and even with reinforcements didn’t feel confident enough to mount up another attack. Finns didn’t feel confident enough to start attacking Russian positions and rather wanted to retreat to the defence positions in order to repel any possible additional attacks. Thus we decided to end the game after moving troops to the new positions.

Historically Finns mounted an attack tow Sipola/Heroja where they encountered stiff resistance. Soldiers who had been present at Lapua said that fighting there had been child’s play when compared to what happended here as the air seemed to be so heavy with bullets that a human being had no hope in surviving. As the evening grew darker and disorder grew Finns started retreating toawrds own lines. During this time Russian cavalry inflicted quite a lot of casualties with the pike armed lanciers. The cavalry had managed to move through the narrow strip between forest and lake Nisos guarded by Finnish artillery by making a mad dash, and apparently, against all odds, suffered just a casualty of one man.

Adlercreutz was feeling rather compromised after the battle and decided to retreat few kilometers to west to village of Salmi. In addition to being dark it also started to rain making the soldiers miserable. As the troops started to retreat small vanguards had the instructions to light up campfires so that Russians would think that the fortificatiosn were still occupied.

However on the Russian side Kamenski had lost his nerve and also ordered his troops to retreat. However, the ever vigilnt Colonel Kulnev decided to scout the Finnish positions and while doing so noticed that their fires were vaning. He soon noticed that Finns had also retreated and quickly went to inform Kamenski about this turn of events. Kamensi immediately ordered a stop to the retreat and gave Kulnev fresh troops and order to follow up the retreating Finns.