Here are tips how to paint your Finnish figures. They are written especially for 15mm figures but apply well to 28mm figures as well. We’ve aimed to get everything as “right” as possible but also tried skimming away as much unnecessary time spent on painting as possible.

Instead of painting figures individually they were painted a battalion at a time to save time. This way it took some 20 minutes to prepare, paint and base one figure. You might want to spend some more time to get your figures look better. Or perhaps even less time if more plain finish is desired. Feel free to customize our way of painting to better fit your own painting style. Our instructions are just something we’ve found to fit our painting style and expectations the best i.e how to get the desired quality in minimum time.

Most of the Finnish regiments used a grey uniform. A couple sources would indicate that a few regiments used grey uniform of lighter shade. Most likely if any difference in shade actually existed it would’ve been quite minor especially as the regular shade was already quite light. The difference isn’t visible in any of the color pics we’ve encountered but most of them are not contemporary ones. Worrying about this probably isn’t worth your while. For the perfectionists the regiments with lighter uniform were: Pori, Uusimaa infantry and jaegers and Savo jaegers. Also note that the of the Swedish regiments Jämtlands regiment used a grey uniform. 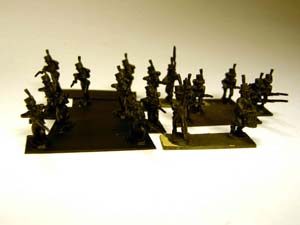 2) Using a large brush drybrush the uniform and the roll on top of the knapsack with a middle grey followed off by light grey. Finally you can add extremely light grey to prominent parts of the figure like shoulders, elbows etc. to get even more contrast. Don’t spend time on worrying about paint getting to other parts besides uniform as you’ll be covering these areas later on and now you just want to spend as little time painting the uniform’s basic color as possible. 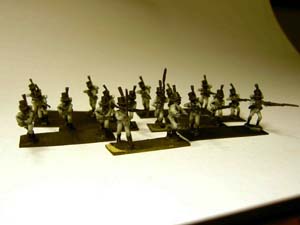 3) After the uniform is ready paint all the facing colors and pipings. First with a darker shade of the color followed by a lighter one to the more central parts of the areas being painted. Leave the middle area of the collar black as almost all regiments had black scarves. The only exception was Västmanlands regiment which used red scarf. 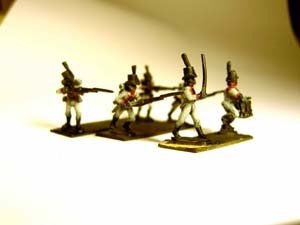 4) Drybrush faces and hands as well as other exposed fleshy areas. You can first do it with light leathery brown followed by an actual flesh tone but leaving out the brown might actually be a good idea so the details on face and hands stand out a bit more. The smaller the scale of the figures the more important this is.

5) Paint the webbing and belt white in case of line infantry and black in case of jaeger battalions. Paint a white brassard to the left arm of the officers. It’ll look better if you first paint the area with dark grey and then paint the middle of this white so that you’ll end up with very thin darker edges.

6) Paint the brown areas (rifle, backpack, canteen and hair) with darkish brown. Paint the more central parts of rifle with lighter brown. Use the same color to drybrush the backpack (which usually is furry) and paint the edges of the canteen and rifle butt. The same lighter brown is used to give a base color for brownish metals like the metal loop on the hat, belt buckle, rifle firing mechanisms and hoops, sword guards and cords and officer’s shoulder straps. Follow with brass/gold (note: Savo jaeger officers had silver shoulder straps). To get more Finnish feel to figures drybrush the hair with sandy or beige color.

7) Either make a very dark mix of black and silver or use suitable gunmetal color and paint the gun barrel.

8) Paint hat, shoes, gaiters, cartridge boxes, bayonet & sword scabbards and greatcoat straps black. Use mid grey to highlight areas on the edges of the hat and cartridge box. Paint the middle parts of the gaiters with dark grey. Note: Savo jaegers of all ranks had boots just like infantry offices.

9) Paint rifle strap red if line infantry and black if jaeger battalions. Add more orangish shade of red to the more central parts of the line infantry’s straps and paint the hat plume and lower cord button in the hat with it as well. 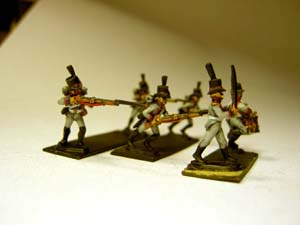 10) Drybrush the plume and paint hat’s cord and lower cord button with yellow. Note: Instead of wearing a hat like all the other infantry regiments Savo jaegers had a shako which had a green backside and green plume.

12) Paint buttons of gaiters and plastron as well as the tip of the scabbards with brass. 11) Paint bayonet bright silver.

13) All drummers had their sleeves decorated with patterns of the facing color. These patterns were unique to each regiment. The exact colors of the drums are unknown but we used barss center with the upper and lower parts painted with yellow/blue stripes.

14) After the figures have been painted they should be varnished. After varnishing they are ready to be based. 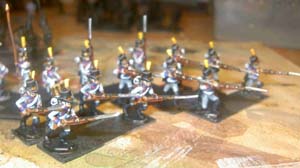 Infantry uniforms of other colours

Pohjanmaa and Vaasa infantry regiments had dark blue coats and yellow trousers. This most likely appiled to newly fored Oulu batallion as well. Karjala jaegers had green coats and white trousers (although one source indicates that the coat was blue so the uniform would’ve looked like a standard Swedish infantry uniform). Start off by painting the coat color the same way grey is painted for the “regular” infantry ie. first drybrush with dark shade then with slightly lighter shade. After coat is ready paint the trousers. For white finish first drybrush with light grey followed by white. Paint the yellow trousers the same way as plumes ie. first with orange followed by yellow drybrush. With the above exceptions these units can be painted like the “regular” grey infantry. Karjala jaegers of course have black webbing, belt and rifle straps like all jaeger battalions. 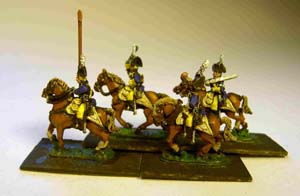 The Finnish cavalry regiments (Uusimaa and Karjala) had dark blue coats with pale yellow trousers so you can paint them like Pohjanmaa and Vaasa regiments with the following exceptions. -The webbing, gloves and trousers were of somewhat lighter shade of yellow so you should use much more white/yellow drybrush when you finish these areas. -Belt is yellow barrelled sash belt with white centre. -Sabertashe is black with Uusimaa regiment having a silvery emblem in the centre. Cords are yellow. -Sword guard and scabbard are silver. The cords in the handle were gold for officers and dark silvery (gunmetal) for other ranks. Some pics show red cords. -Headgear had a white plume and yellow cords. Cord buttons of Karjala dragoons’ bicornes were orange (top) and white (bottom). Uusimaa dragoons had a silver emblem in the front of their shako. The horse equipment is the usual black/ brown leather. Saddle blanket is yellow for Karjala dragoons and light blue for Uusimaa dragoons. Both are laced white and the lacing is divided into two by the main saddle blanket color. Paint the main color first using a darker and subsequent lighter shade of it and then finish off with lacing. To make yellow/white stand out better first paint the lace with dark grey and then with white leaving thing edges of grey. Blanket is dark blue and its straps are white. To give more Finnish feel to cavalry paint the majority of horses as Finnhorses. They tend to be chestnut to light brown colored with flaxen tail and mane so even the horses tend to be blondes in Finland 🙂 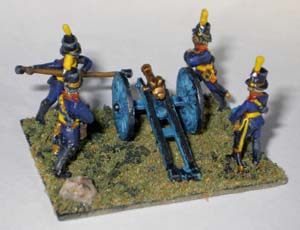 Finnish artillery regiment had an all blue uniform with red collar and black cuffs. Webbing and belt were yellow. Paint artillerymen as you would paint regular infantry but instead of grey use dark blue for uniforms. Savo infantry regiment had its own artillery company. Their uniform was exactly the same as the Savo jaeger uniform, with the exception of red collar. Artillery equipment is greenish blue. First paint with a darker shade followed by a drybrush of lighter one. Finish by painting the metal parts with gunmetal. Bronze barrels are first painted light brown, given a dark brown wash and finally drybrushed first with bronze and then gold. Iron barrels (Helvig 6pdr) are painted black followed by a drybrush of gunmetal.

Paint these like you would paint Finnish infantry of “other colors”. The Swedes have dark blue coats and white trousers. All other details are the same as with all the Finnish regiments with the exception of regimental facings of course. Note that while the guard units wore white gaiters on parade they apparently had black gaiters on campaign. The guard units also had white lace around the buttons on their cuffs, collars and plastron.

Various browns and greys should dominate the pallette with the very occasional green thrown in for good measure. Flax/linen is also a solid color for Finns.